Sometime in 1876 (or 1878 – accounts vary), the Lanham Community saw the need for a church. Thirteen people met under a tree less than a mile from the site where the church now stands. There, they conducted a survey as to their individual beliefs and it was decided to organize themselves as a Methodist church. The thirteen charter members were: Mr. and Mrs. J.P. Major and daughter Mattie, Mr. and Mrs. B. Ellis Major, Mr. and Mrs. Jim Blakley, Mr. Stephen E. Ellis, Miss Tilda Pearson, Mr. and Mrs. Dock Pearson, and a local preacher named Trammel, and his wife.

The new church was named Mt. Zion Methodist Church, but later came to be called “The Lanham Methodist Church.” At first, the church meetings were held in the home of J.P. Major, with Rev. Marion Mills serving as pastor. Then, the church met under a brush arbor which was constructed on the creek hear the Major’s home. Later on, the church held services in a little schoolhouse which stood about a mile west of the church’s present location.

On May 2, 1881, five acres of land, more or less, was given “in consideration of the love of Christ and for the further consideration of one dollar” by Mr. and Mrs. J.K. Wilson. The deed, recorded in the Hamilton County Courthouse, gives this land in the name of the trustees and their successors: Mr. Wm. Reese, Mr. J.P. Major, Mr. J.P. Key, Mr. Wm. Lee James, Mr. J.P McCuisleaw, and Mr. S.R. David.

About that time, the church purchased a small house and moved it across the road from where the present church now stands. It was not long after, on a night when Henry Hover was making his way home on horseback, a flash of lightning lit up the night and showed him that the church had been blown down by the terrific winds. The next morning, all could see the devastation. 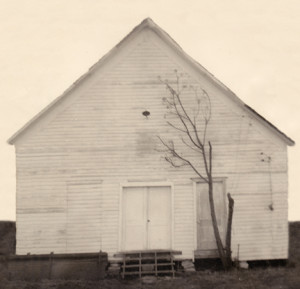 In 1887, a church building was erected (see photo at left) and it stood for 73 years, serving the people of the Lanham Community as their house of God. That edifice was torn down to make way for the new church building which was dedicated in January, 1960.

The Church flourished from the beginning. Throughout the years, many new members came who paid and prayed and worked together. Early on, the church was a part of the Jonesboro Circuit and people came to the services from near and far by horseback, horse-drawn wagons, ox wagons, and buggies.

An important part of the church program was the establishment of a  good Sunday school. With few exceptions, the Lanham Methodist Sunday School has run continuously since inception.

Camp meetings were held in the summers under a brush arbor or large tent. Great interest was shown in these meetings and whole families quit their work to come and camp near the arbor. For many years the campground was located in the Ballard Cove near the Henry Ballard home. There was plenty of water, firewood, and shade. The services were announced by the blowing of a hunter’s horn usually in the hands of Grand E.P. Bell. Two or three services were held daily and everybody enjoyed visiting with their neighbors and serving the Lord together. The preaching was good and the singing vigorous. Many were converted and shouts of joy were heard on every side.

Life was not easy in the early days for these pastors or circuit riders. Neither summer’s heat, winter’s cold, storms, nor high water detained them. They preached on Saturday morning, Saturday night, Sunday morning and Sunday night. Despite the distances and slowness of means of travel, everyone found time to go and hear them.

At the dedication ceremony of the new church on January 18, 1960, these words were spoken: 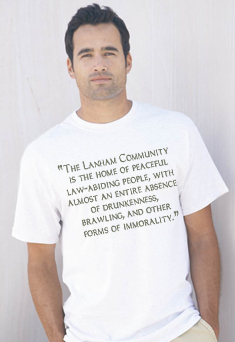 Measured by the yardstick of spiritual things, only Eternity can tell the number of souls saved and the lives strengthened from that early date to the present time. But measured by the yardstick of tangible things this immediate community has been known through the years as the home of a peaceful law-abiding people, with almost an entire absence of drunkenness, brawling, and other forms of immorality. This a a direct result of people honoring God in regular public worship in their daily living.

Here at Lanham, we believe that it is worthwhile to go to church and we want to extend our invitation to all who will come. Though we be not great in number, we feel that our services are just as pleasing in the sight of God as the incense of worship arising from the grandest cathedral on earth.

We are truly thankful to our Lord for the wonderful hours we have spent together in this grand old church, for the way of life we know from its teaching and for its material and spiritual shelter. Lord keep us in thee as we lay down this thy house.

Writing our church history has been a difficult task, most of the older records come from memory.  Many of our congregation have been kind enough to help with this project. If you have other information to add, we would appreciate it. Be sure to visit the GALLERY page for a slideshow of the church throughout its history. We welcome your photographs or other documents which can be used to enrich the story of the Lanham United Methodist Church.  Please use the CONTACT page to help us out. Thank you!